I see a number of blog posts and books like this, this, and this that will develop an interesting theory and then relate it to the dating problem but in a cursory fashion, as a subset of a more abstract problem. Here I try to aggregate these pieces together into a series of considerations that may be useful?

The TLDR; go on lots of dates, exploring more than you otherwise would. Commit to more serious relationships when they are great but don’t be afraid to end them, and being biased towards meeting more people rather than committing to any one person at least until your later 20s.

What is your utility function?

I recall some study where they had people list their “type” before doing a round of speed dating. The people they liked the most in the speed dating were often quite different from the people they said they liked abstractly! Scott Alexander writes about the weirdness and diversity of interpersonal interactions that come from different vibes or “auras”:

A few years ago I had lunch with another psychiatrist-in-training and realized we had totally different experiences with psychotherapy.

We both got the same types of cases. We were both practicing the same kinds of therapy. We were both in the same training program, studying under the same teachers. But our experiences were totally different. In particular, all her patients had dramatic emotional meltdowns, and all my patients gave calm and considered analyses of their problems, as if they were lecturing on a particularly boring episode from 19th-century Norwegian history.

Variance in interpersonal vibes is very real and incredibly important, I think it partly explains why what we think we like on paper is totally different from reality. And this doesn’t even account for the fact that what we think we like may be simply limited because we don’t know what else is out there (see the next section). A friend, upon ending his first serious relationship and starting another said, “I had no idea what I was even compromising on.”

A fun extension on vibes dominating over expressed preferences is research on pheromones and maximizing MHC diversity. Potential partners “smell better” if they have very different proteins that present segments of pathogens to the immune system. This is a way for evolution to encourage a very high diversity of immune systems, hedging against any particular pathogen wiping everyone out.

The distribution of possible relationships is heavy tailed whereby there is a much higher probability of outcomes at the extremes than otherwise. Ben Kuhn writes:

Because heavy-tailed distributions are unintuitive, people often make serious mistakes when trying to sample from them:

They underestimate how good of an outcome it’s possible to get.

They find it hard to tell whether they’re following a strategy that will eventually work or not, so they get incredibly demoralized.

The next two sections address difficulties with ending a current relationship and how to keep drawing more samples from the heavy tail in the face of bad dates and boring parties. But first, this heavy tail is super important!

The difference between, say, a 90th and 99th-percentile relationship is relatively easy to observe: it only requires considering 100 candidates, many of whom you can immediately rule out. What’s harder to observe is the difference between the 99th and 99.9th, or 99.9th and 99.99th percentile, but these are likely to be equally large. Given the stakes involved, it’s probably a bad idea to stop at the 99th percentile of compatibility.

This assumes that all of these candidates are interested in dating you of course. And the distribution of possible outcomes is huge and average outcomes are bad1:

In the US today, almost 50% of partnerships end in divorce, whereas the 99th percentile probably involves the couple being (on average) extremely happy with each other for 50+ years. In other contexts, this seems likely to be even more true; for example, in some low-income countries with regressive gender norms, over 25% of women who have ever had a partner experience domestic violence each year, which probably makes the average partnership extremely bad.

Finding a life partner is a binary event. It is also very difficult. This means most attempts like deciding whether or not to go on another date or to a party will almost always fail and feel disheartening. Chris Olah introduces the idea of “micromarriages” as a motivational tool to help handle this despair. You should imagine that every action you take to expose yourself to your potential life partner wins you “micromarriage” points and that in expectation, if you acquire enough of them, you will find a (marriage) partner.

Is the person you’re currently seeing the best you’ll ever meet? Ben Kuhn suggests a useful prior when considering sunk costs should be that you will have to put in the same amount of time and effort that you did before to get into a relationship of similar quality that you are currently in.

Of course you may need to update this prior if you have moved locations, now have very different life circumstances, etc. but very often these considerations don’t apply or should only be small updates to the prior.

This is the explore versus exploit dilemma in the form of how many different people you should date before committing to any particular one. This problem was initially called the “Secretary Problem” and has a number of formal mathematical solutions, however, they all make unrealistic assumptions like that you want to find the very best person and only this person, even finding the second best is considered a total failure. It also assumes that you have no prior knowledge about the distribution of people, that you have a clear utility function, and that it is costless to search and score different people.

There are some really exciting innovations going on right now that will redefine who can have a baby and when. I think with 80% probability that within the next 5 years it will be scientifically possible (legislation will take longer) to create sperm and eggs from a skin cell. See this Twitter thread for a great summary of the players and opportunities involved:

Inside the startup companies trying to turn adult cells into oocytes.

Most importantly, this will significantly increase the age at which women can have kids! This is especially true when it is combined with technology for ex vivo uterus to grow the fetus in.

While this will be incredible, I think people will still want to have kids young enough that they aren’t too old to raise them. Moreover, while the age of marriage and kids has certainly shifted older, it will take time to shift further and during which point you don’t want everyone else to find a partner and settle down while you are still single. There may also be some amount of averse selection where the people who are still available and single at older ages are lemons!

TODO: find a chart of the number of single people as a function of time.

However, these caveats aside, this technology – especially for women who are worried about their reproductive window – will give them much more time and optionality to… say it with me… keep drawing samples from the heavy tail!

An easy way to acquire more “micromarriages” by drawing more samples from the heavy tailed distribution of potential life partners is online dating! It does not need to be mutually exclusive from meeting people through friends/life events. In fact it is complimentary because it will expose you to all sorts of people from very different social graphs you may otherwise never meet.

Also, if you still think that online dating is weird or unpopular then I’ve got news for you: 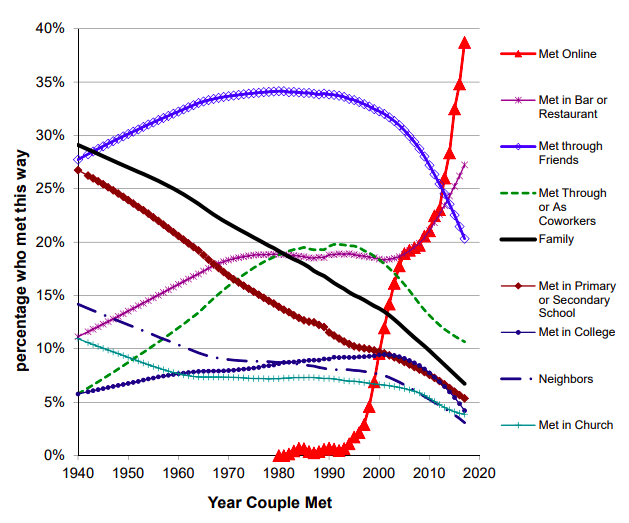 If you’re going to stick with just one app then I recommend Hinge. You have to add answers to three prompts (there are a bunch you can choose from) like “unusual skills” and the answers to these can really help you get a first approximation to what someone is like.

6 Months to Get to Know Someone?

As important as it is to draw lots of samples from the heavy tail, evaluating someone for life partner potential takes a lot more than a resume. Especially when figuring out if the person is in the 99 versus the 99.9th percentile. This raises the interesting question of how long it takes to get to know someone really well. It will certainly depend upon how open/vulnerable you are, how much time you spend together, the number of difficult situations that are encountered, etc.

It would also be ridiculous if getting to know someone better increased linearly. It should be some sort of step function with diminishing returns over time and probably follows its own heavy tailed power law in terms of the amount of information provided by each experience!

In light of this, I genuinely don’t know what the answer is and how to weigh this against the opportunity cost of dating other people. My current weak heuristic is around 6 months.

A Piece of Your Heart

Going through dates and especially relationships hurts. This article in summary argues from a number of angles: heavy tails; longer fertility; online dating; for drawing more samples than you otherwise might. However, I do want to acknowledge the difficulty of ending a relationship with two aspects in particular:

First, deciding to end a relationship feels like self sabotage. We live in a cold, harsh world where affection and trust are hard to come by. Here your partner is, providing these scarce resources, and here you are saying that you don’t want them anymore and that they should go away! Who are you to have the conviction and hubris to cast away such pure gifts that anyone would be lucky to receive? Maybe it is helpful to analogize this process to a forest fire that in removing the previous trees sets down nutrients (in the form of acquired experience) for the next relationship to flourish?

Second, any relationship worth being in – where at some point you come to genuinely love the other person – will capture and keep a piece of your heart. This hurts. But there is something beautiful about it. I think the phrase, “better to have loved and lost than to have never loved at all” captures this sentiment. Beyond the emotional heart loss, I have read that couples microbiomes will synchronize over time from kissing. And longer term couples will also use each other as external memory caches e.g. “honey what was the name of that place again?” so breaking up is literally losing your microbiome and a bank of your memories. But it is still beautiful!…

Thanks to Max Farrens, Miles Turpin, Joe Choo-Choy, and Alexander Bricken for influential discussions and reading drafts of this piece. All remaining errors are mine and mine alone.