Talent is a conversation starter on the under discussed topic of how to identify talent but not much more.

Maybe it is because I think so highly of Tyler Cowen that I expected the long anticipated Talent to be harder hitting and more insightful. A couple of the interview questions are interesting and a few other factoids that I’ve tried to aggregate. But otherwise the book is basically a Psych 101 introduction to the Big 5 Personality types that is covered more carefully and thoroughly by its Wikipedia entry.

In classic Straussian fashion, the main takeaways of the book in the foreword are trite while the actual ones are:

The discussion of interview questions and strategies to do this is are the strongest part of the book but also only one chapter.

Questions I want to add to the list are:

Behind the scenes during the interview you want to:

On breaking the ice and how anything goes:

On the topic of references, they are are very important but often don’t have much time and don’t want to say bad things. Try to get things into conversation mode and ask for objective comparisons:

This first question, reformulated as, would you be ok with this person being your boss? I think it is a great question to ask yourself about any hiring decision too. 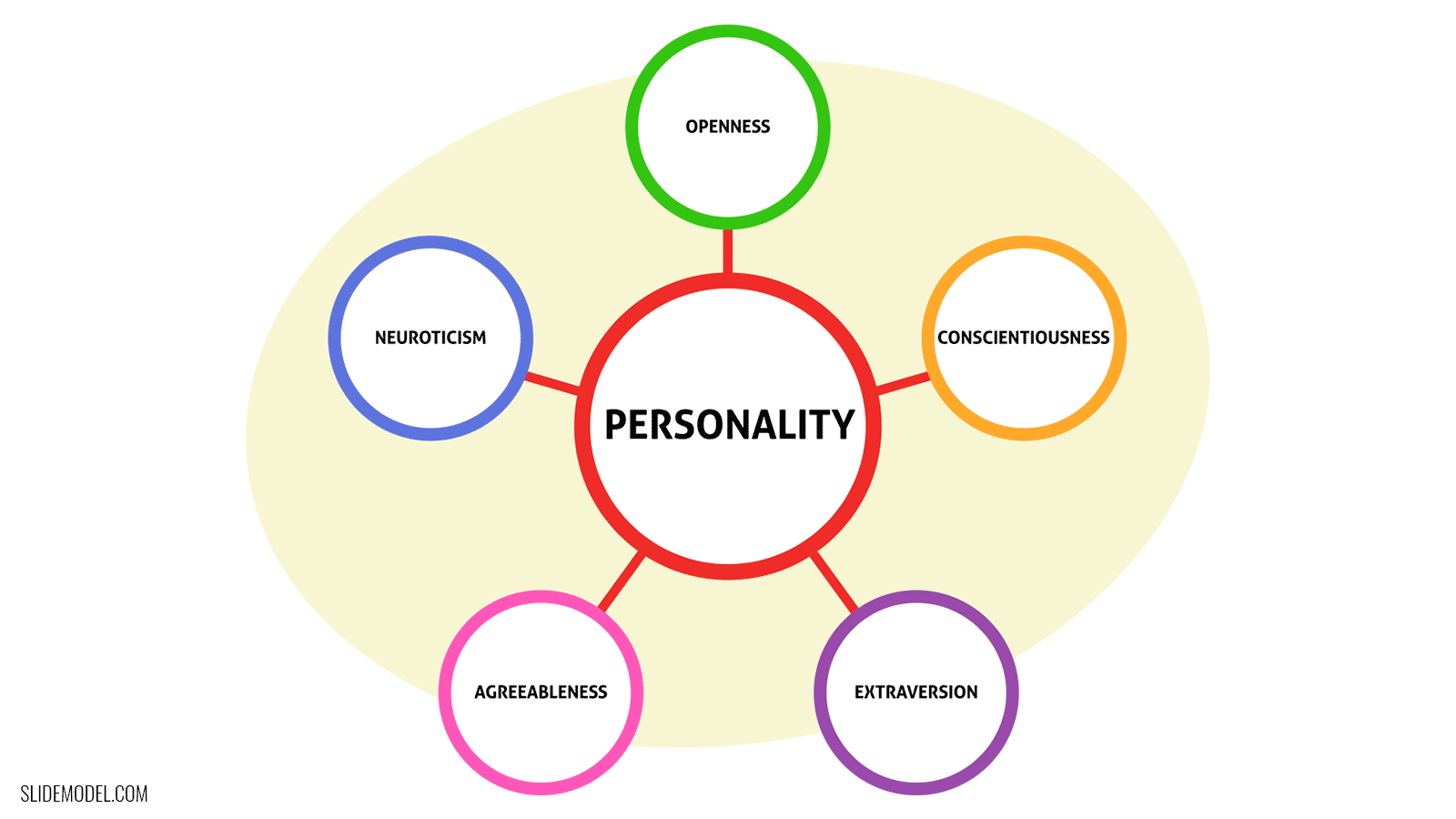 What colored circle describes you?.

The meat of the book talks about IQ and the Big Five Personality types but covers these in a cursory and not particularly precise way. For example, they give very loose definitions of the Big Five traits, under extraversion they say “friendliness” but should this not be under agreeableness? For neuroticism they define it as:

But how does this relate to depression and also to just being less emotionally stable? They go on to talk about neurotics as if they are just people who often complain and lead social movements giving John Calvin and Gandhi as an examples of “pests” or “as prickly individuals.”

They define conscientiousness as:

High conscientious individuals have high self-control, are very responsible, have a strong sense of duty, and usually are good at planning and organizing, due to their reliability.

But this mixes both morals and being a hard worker.

There is a summary of psychology/psychometrics on how the Big Five impacts job performance and earnings. While they do a good job hedging by talking about the replication crisis and needing to take any of these results with a grain of salt, they simultaneously cherry pick a subset of studies that readers will likely over update on.

For example, a study found 20% of variance in achievement for scientists was due to personality after adjusting for scientific potential and intelligence but my guess is that this varies dramatically across the specific subfields depending in a large part upon how collaborative the field is (think a large biology lab versus a mathematician with his chalk board).

In the section on IQ they paint a picture where it is somewhat useful but not all that important? While I largely agree, I again wish they had been more precise and covered more ground. For example, they fail to acknowledge g instead making sweeping statements like “Intelligence is context dependent”. They also fail to talk about the Flynn effect, don’t acknowledge that IQ tests in the US are illegal for hiring, and at times seem to blur IQ with creativity and the quality of one’s ideas.

They also seem to get things wrong when they say there is “evidence that autistics have strong performance on Ravens IQ tests” but this is not true on average from having read NeuroTribes and just looking at top cited papers via a cursory google search seems to back this, for example here. I also wish they had clarified other results I have seen around polygenic scoring and genetic predictors for personality type. See for example, Top 10 Replicated Findings from Behavioral Genetics. And that they had brought up other interesting phenomena such as birth order effects.

At times the book seems to lose track of its audience, jumping without any clear delineations between being a self promoting biography of Tyler and Daniel; a management book; and a self help book. The personal anecdotes are often lengthy and the third person writing can be a bit much at times. The book also deviated into the occasional over-grandized motivational self help sales pitch with phrases like:

Do you wish to be part of such trends for mobilizing the talents of strongly unique people, or are you going to let others eclipse you in the search for talent?

And management advice such as when discussing the move to remote work saying:

Those methods will reward non-paranoid leaders who are okay with giving up some sense of control in the moment, and you will need to adjust your style more in that direction, if you have not already.

Even on the back cover it says:

Identifying underrated, brilliant individuals is one of the simplest ways to give yourself an organizational edge.”

But if it is so simple then why is an entire book trying to discuss the nuances and how it all comes down to context?

They also move between focusing on how to hire real outliers to how to hire for standard positions. For example, in the interview section, early on they say they will discuss unstructured interviews typically used for more senior positions instead of structured interviews where the same question is asked to every candidate. But later when discussing the Big Five personality types they turn their attention towards hiring mediocre candidates for entry level jobs.

Maybe the problem is me getting my hopes up too much for this book both in terms of what I expect from Tyler Cowen and also how hard it is to make any meaningful statements about something as context dependent and difficult as finding talent? And while the book tries to be prescriptive, they correctly acknowledge that at the end of the day it is all context.

I’m now going to transition into notes from the book that I found interesting:

On the talent spotting abilities of Thiel:

Peter Thiel found and helped to mobilize the talents of Elon Musk, Reid Hoffman, Max Levchin, Mark Zuckerberg, and others, including Steve Chen, … . His approach is not well described by any kind of mechanical formula, and Peter’s own background is in the humanities – philosophy and law – rather than science or tech. Many of his current interests concern religion, as he studied the Bible under French anthropologist and philosopher Rene Girard, who was a professor of Peter’s at STanford. We understand Peeter as applying a very serious philosophical and indeed even moral test to people. … In our view, Peter actually asks whether you deserve to succeed, as he understands that concept, and he derives additional information from that interior and indeed deeply emotional line of inquiry.

How Thiel is compelling:

The first time each of us met Peter Thiel, for instance, we noticed how engrossed he was in his explanations and, furthermore, how quickly and effectively he pulled people into his worldview, introduction and applying concepts such as “technological stagnation,” “the inability to imagine a future very different from the present,” “Georgist economics,” and “the Girardian sacrificial victim.” Maybe you don’t know what all of those concepts refer to and maybe Peter’s audience doesn’t either, but that is not the point. There is a logic to his argument, and Peter communicates that logic with the utmost conviction; the audience correctly senses a coherent underlying worldview.

Another Thiel anecdote I love that is not in the book but is just absurd is that his Roth IRA is worth $5B (you can only deposit into these when your income is low and only $6K per year. It is also not taxable!).

Focus not on where someone currently is but their rate of growth.

I found it amusing that Altman on talent says:

I look for founders who are scrappy and formidable at the same time (a rarer combination than it sounds); mission-oriented, obsessed with their companies, relentless, and determined; extremely smart (necessary but certainly not sufficient); decisive, fast-moving, and willful; courageous, high-conviction, and willing to be misunderstood; strong communicators and infectious evangelists; and capable of becoming tough and ambitious.

Should we call in a superhero? Isn’t he just listing every possible desirable characteristic? Isn’t the value of VC in finding “alpha” by investing in people who don’t fit all of these straightforward criteria?

On the importance of speed and being proactive:

Years ago I wrote a little program to look at this, like how quickly our best founders – the founders that run billion-dollar plus companies – answer my emails versus our bad founders. I don’t remember the exact data, but it was mind-blowingly different. It was a difference of minutes versus days on average response times.

One they did not state but stuck with me from Altman’s podcast with Tyler was that the most successful founders all came from stable, middle class families. This may have something to do with their risk tolerance?

The later sections covered Disabilities, Minorities, and Gender. I thought the sections on minorities and hiring for diversity are important and broadly well stated. However, I have already highlighted my issue with the claim about autism being positively correlated with Raven’s Matrices. Here are some of the more striking points from the section on gender:

Thanks to Davis Brown for reading drafts of this piece. All remaining errors are mine and mine alone.